After attending this year's Gen Con (North America's biggest board game convention), we discovered dozens and dozens of great games. Here is our top 5 board game discoveries.

A simple game with a lot of depth. Great for casual gamers, amazing for experts. Flawless production, quality components and reasonable price. Everdell has everything I'm looking for in a board game. Here are some pictures we took at Gen Con: As a big fan of the Forbidden series, I was really looking forward to Matt Leacock's new board game: Forbidden Sky. I was not disappointed! It truly feels like a Forbidden game and yet, it feels totally unique. I think this is the most unique one of the three. If you like entry-level cooperative board games with quality components and challenging gameplay, look no further than Forbidden Sky. Your crew is stuck in a cloud city and Lando is not there to help. You will need to boost your spaceship by attracting the lightning bolts surrounding you. But be careful! Those same lightning bolts could very well be the end of you and your crew. Forbidden Sky is exciting, simple and challenging. I just LOVE this game. I really like immersive board games that tells a story and Western Legends really does just that. The game gives you one of America's most known Western figures (Jesse James, Doc Holliday, Calamity Jane) and allows you to do anything you want. Rob banks, play poker, duel an opponent, mine for gold: the options are very varied and are all a valid strategy. If you choose to be an outlaw, be careful. It puts a target on your back because arresting you represents a considerable reward! I love everything about this game!

The game that I will never be able to write (thank the Internet gods for copy/paste). While Gen Con isn't great for heavier games, this one was so good that it made its way to the convention and managed to be very popular. We had the chance to play the game and it is truly unique. It's a worker placement game that uses dice to track the age of your worker. Once they reach 6, they ascend and you get a new worker. The game is not as complicated as it looks and teaching it seems really easy.

If you like Yokohama or Manhattan Project, you NEED to get this one. Gizmos is amazing. For under 30$CAD, the game comes with an amazing card board ball dispenser and tons of beautiful marbles. It's an engine building game (a little bit like Splendor or Century: Spice Road) with a very simple, streamlined gameplay where you collect marbles, exchange them for cards that will unlock new actions and new powers. 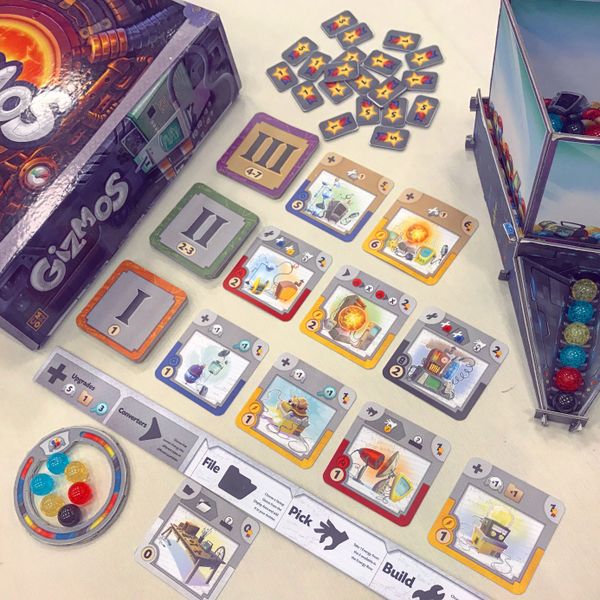 There is nothing not to love about this game, especially at such a low price tag. If you like Splendor or Century, Gizmos as the potential of keeping them on your shelf, away from the table.

What 5 games are YOU looking for in the next year?